How to choose ultrasound frequency for beacons?

In this article we touch the first topic mostly – trilateration – and answer the questions how to choose between different ultrasound frequencies of Marvelmind beacons and why.

See more about the radio connectivity.

The oscillograms below are the real examples from a steel making plant:

What to pay attention to: 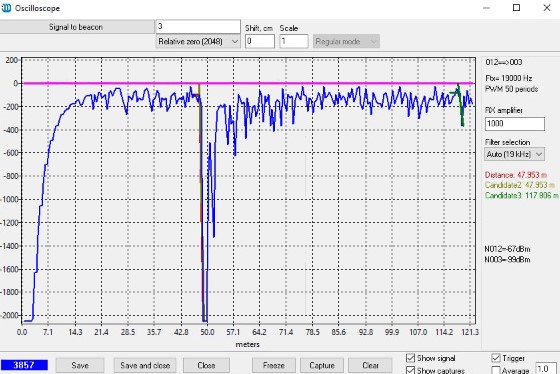 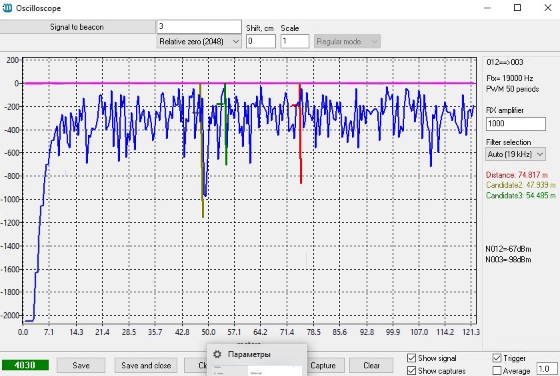 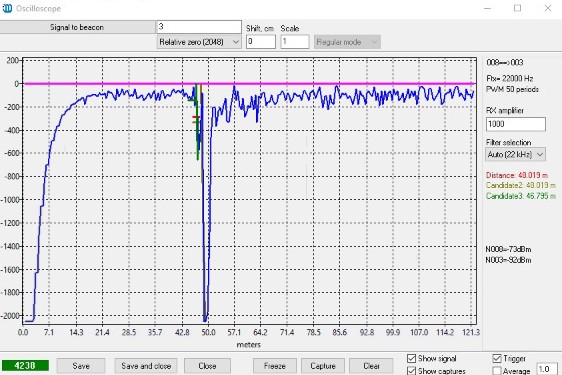 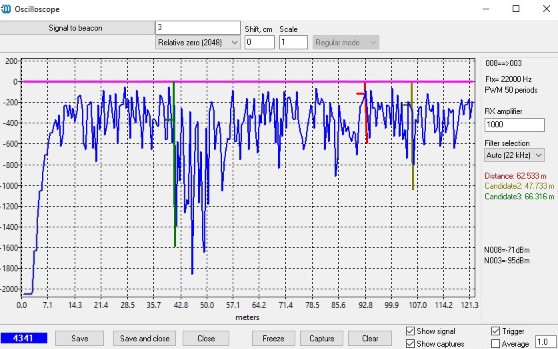 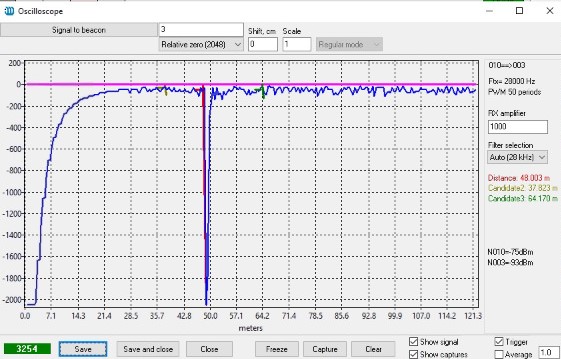 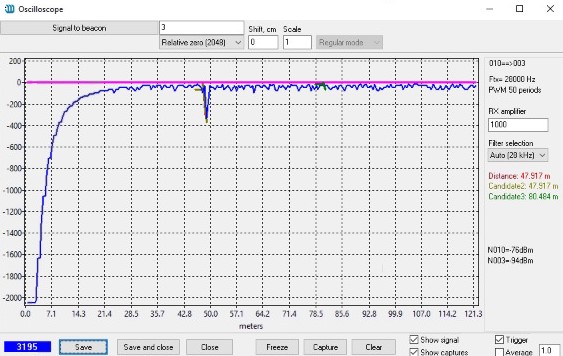 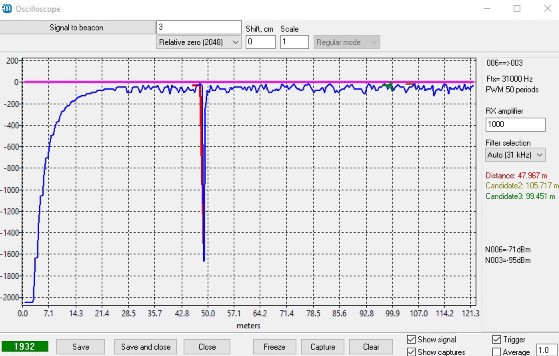 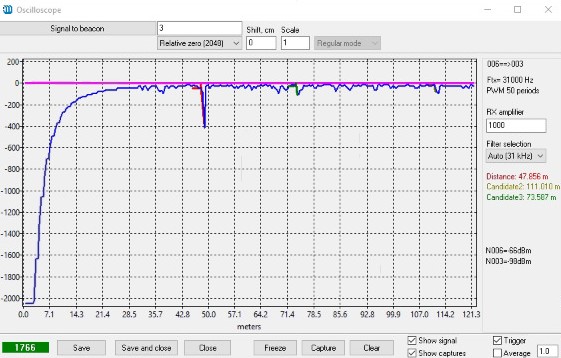 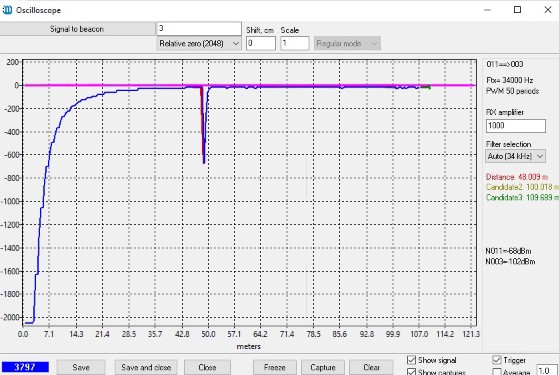 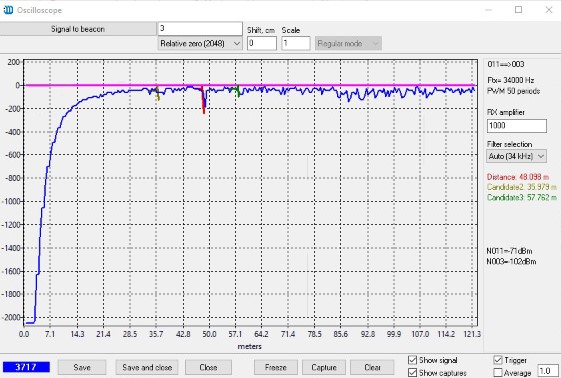 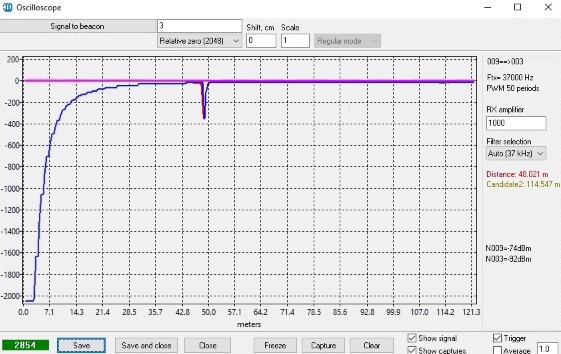 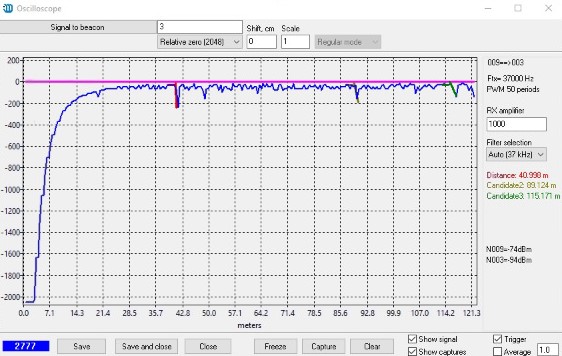 Help: how to use embedded oscilloscope

Why are there different ultrasound frequencies required?

Naturally, potential users may have questions:

To simplify the decision process, we have sets – for robots, drones, forklifts, people, etc. You purchase them and they already the most recommended configurations of beacons with the right frequencies.

But why? What are the underlying principles behind those recommendations and beacons’ selection? Let’s discuss deeper.

Question: Wouldn’t it be easier or better to have only a single frequency for all beacons?

Answer: Yes, it would be, if it was practically feasible. However, there are several factors against it. Thus, multiple frequencies are better in practice:

Question: OK. But why to choose the resonating transducers in the first place? Why not to use wideband “ultrasound speakers” or something?

Answer: Yes, it is possible to use wideband ultrasound speaker to transmit ultrasound and that would bring a lot of simplification to the system. However, such speakers typically produce significantly weaker ultrasound signal, thus limiting the range the system can operate. For example, Marvelmind Indoor Positioning System can comforable work with the beacons placed up to 30 away. With Marvelmind Horns – up to 120m away.

low efficiency, i.e. it would require significantly more energy to produce the same level of ultrasound signal as the resonating transducers do. A

Question: But why not to just provide a lot of power to the ultrasound speakers and to produce strong ultrasound signal?

Answer: It is also possible. However, since the non-resonating wideband ultrasound speakers typically have low efficiency, it would require significantly more energy to produce the same level of ultrasound signal as compared with the resonating transducers. Which means that the beacons with wideband speakers must always be powered from the external source that is often would become a limiting factor for such beacons.

Despite that, yes, it is possible to build the system with low-efficiency wideband ultrasound speakers. In many cases it could be a very good option and an alternative providing a new layer of flexibility of building the precise indoor positioning systems.

Question: So, how does different frequencies of beacons help?

Answer: If we can’t use modulation, we can separate different ultrasound signals either in time or in frequency.

Time division multiple access (TDMA) is easier. That is the basis for NIA. No ultrasound signals are transmitted at the same time within 50m or so of open space. The system is easy, robust, but with the growing number of mobile beacons that are emitting ultrasound, it becomes proportionally slower per mobile beacon, i.e. if the update rate per system is 16Hz, then the update for 1 mobile beacon will be 16Hz; for 2 mobile beacons = 16Hz/2=8Hz, for 10 mobile beacons => 1.6Hz, etc. For many applications it is too slow.

Also, in some cases, it is simply inconvenient to have emitting ultrasound mobile beacons, for example, on people, because the beacons produce, albeit quite, but still rather observable “tick” – very short ultrasound pulse, that people hear as a “tick”. People can’t hear ultrasound, but the ultrasound pulse have weak elements of acoustic frequencies that can be heard that can simply disturb people, particularly, in quite areas. It is much better to have “ticking” beacons – ultrasound transmitting beacons 5-30m away, where the ticks are not even observed in practice.

But in order to distinguish between the simultaneously transmitted the ultrasound signals, they must be on different frequencies then.

It is difficult to filter the ultrasound signals that are close in frequency and short pulses have pretty wide transmitting spectrum as well. Thus, there is a practical limitation on how many ultrasound frequencies the system can have. But, in general, the more frequencies, the easier is to build large maps consisting of dozens of submaps or to have a better performance of swarms of drones.

We are discussing the practical differences between different ultrasound frequencies below and give recommendations which frequencies to choose for your beacons, when ordering.

At the same time, Super-Beacons, as well as, Industrial Super-Beacons and Mini-RXs and resulting products supporting IA, such as Helmets, Jackets, Badges, Caps, etc. can receive and ultrasound frequency or several of them or all of them at the same time, because the receiving microphones are wideband and digital filters of the beacons allow beacons to distinguish between different ultrasound frequencies.

To choose the same or different ultrasound frequencies?

In 95% of real use cases, it is recommended to choose different ultrasound frequencies for your beacons, when you are ordering, because it gives you more freedom with your indoor positioning system system.

When to choose the same ultrasound frequency for beacons?

1) Choose the same frequency, if you already have, let’s say, Beacons HW v4.9 on 31kHz and you run NIA and want to expand your system:

2) You can add stationary Super-Beacons in NIA with any frequency as an expansion for your system based Beacons HW v4.9 on 31kHz:

What are the impacting factors on different ultrasound frequencies?

There are several factors affecting on the most optimal selection of the ultrasound frequency for the beacon:

Transducers of some ultrasound frequencies produce stronger ultrasound signal than transducers on other frequencies. The frequencies from the strongest to the weakest. It is a rough assessment to give an overall understanding, rather then a precise engineering science:
For example, the difference in levels observed between in the strongest 25kHz and the weakest 45kHz is about 10 times. Though, it is worth to clearly point out that it is not purely due to weaker transmission, but also because of weaker reception (lower sensitivity in 45kHz) and higher propagation loss in the air for the ultrasound signal for 45kHz as compared to the 25kHz signal.
But does it mean that the 45kHz is 10 times worse than the 25kHz frequency? – absolutely not! Even more, there are cases when the 45kHz frequency is preferred and recommended to any other frequency:

Microphones have non-flat sensitivity between the different ultrasound frequencies. The rough assessment to give an overall understanding, rather then a precise engineering science (from the most sensitive to the list sensitive):
The order of frequencies from sensitive to less sensitive is rather similar to that for transmission from stronger to weaker, which is mostly a coincidence. Though, there is some underlying physics as well:

Attenuation in the air with the distance due to absorbtion

That is simple: the lower the frequency – the lower the attenuation. That means that for the highest range it is generally recommended to have lower frequency. Though, it shall be remembered that other factors, mostly, the external acoustic noise may significantly impact on the resulting signal to noise ratio.

Therefore, it it general very much recommended to run practical tests on the factory floor, for example:

Surprisingly, we see the big difference between the frequencies in practice, but not as big. However, as discussed, there are many affecting factors (sensitivity, transmission efficiency, directivity, etc.)

What are the practical differences between different frequencies?

Does the ultrasound impact people, animals?

Practice shows that while people can hear quiet ticks produced by ultrasound transmitting beacons in quiet rooms, animals, even those that potentially can hear ultrasound, pay absolutely now attention to it. At least, their behavior doesn’t change at all.

We believe, the short (0.5-1.5ms) ultrasound pulses coming with ~8Hz rate from the ultrasound transmitting beacons are heard by the animals as just loud ticks, but nothing more. Similar to what people can hear, but louder. However, the animals remain indifferent whether there are beacons or not in their vicinity.

Though the beacons operate in ultrasound, which is not heard by humans, and the beacons emit very short pulses, thus the average transmitting signal or the level of ultrasound noise is about 1/1000 of the peak level, we recommend to keep ultrasound transmitting beacons at least 2-3 meters away from people in order to minimize even a slightest probability of a potential impact of a long-term exposure to ultrasound.